Watermelon was grown by the ancient Egyptians and it’s still evolving today. More than 300 varieties of watermelon are cultivated in the United States and South America, where complementary growing seasons provide a year-round supply of watermelon in an array of shapes, colors and sizes. The development of seedless varieties revolutionized the watermelon market, making this age-old fruit appealing to today’s more discriminating consumers. Because there are so many varieties, they are often grouped according to characteristics, like fruit shape, rind color or pattern, and size. Other varieties, like yellow and orange flesh watermelon, have also created additional intrigue and appeal, opening up the market to new consumers.

The most common watermelon types are: Where do seedless watermelons come from?

Seedless watermelons were invented over 50 years ago, and they have few or no seeds. When we say seeds, we are talking about mature seeds, the black ones. Oftentimes, the white seed coats where a seed did not mature are assumed to be seeds. But this isn’t the case! They are perfectly safe to swallow while eating, and don’t worry – no seeds will grow in your stomach.

In other words, a seedless watermelon is a sterile hybrid which is created by crossing male pollen for a watermelon, containing 22 chromosomes per cell, with a female watermelon flower with 44 chromosomes per cell. When this seeded fruit matures, the small, white seed coats inside contain 33 chromosomes, rendering it sterile and incapable of producing seeds. This is similar to the mule, produced by crossing a horse with a donkey. This process does not involve genetic modification. 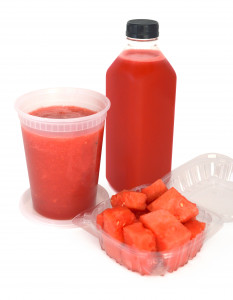 In addition to fresh watermelon, the watermelon industry is expanding the availability of watermelon in different formats including:

Consumer demand for watermelon is year-round: